How The New Secure Act Will Impact Your IRA 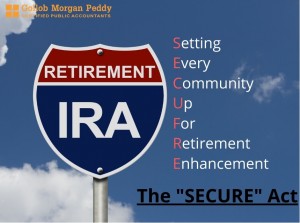 On December 20th of 2019, the President signed into law the Setting Every Community Up for Retirement Enhancement Act (SECURE Act). This is a bipartisan bill, meant to aid Americans’ ability to save for their retirement. It is the most significant retirement legislation passed in over a decade and many of its changes are effective as soon as January 1, 2020. The SECURE Act includes thirty provisions aimed at expanding access to retirement programs. Three of the most important changes impacting IRA owners are as follows:

Previously, retirement plan participants and IRA owners had to start taking RMDs from their plan by April 1st of the year following the year they turned 70 ½.

The SECURE Act changed the required beginning date for RMDs to April 1st following the calendar year of the IRA holder’s 72nd birthday, provided that the individual turned 70 ½ after 12/31/19. Individuals with Roth IRAs would not be impacted by this new provision as RMDs are not required to be taken at any point during the original beneficiary’s lifetime.

Note that the age for making a qualified charitable distribution (QCD) has not changed from 70 ½. QCDs are not taxed as income and can be a tax-efficient way to gift to a charity. Because any distributions reduce the IRA balance, QCDs reduce future RMDs.

The SECURE act removed the maximum age limits; however, contributions will still be subject to the same rules to determine if they are tax deductible.

As individuals approach retirement, they should consider the impact that making traditional IRA contributions will have on their cash flow, tax deductions, and future RMDs. Even if they are still working, they will have to take RMDs starting at age 72. Contributions to traditional IRAs increase the year-end balance used to calculate future year RMDs.

For deaths of plan participants or IRA owners occurring before 2020, beneficiaries were generally allowed to take distributions over his or her life expectancy (in the IRA context, this is sometimes referred to as a "stretch IRA").

The SECURE Act will require most beneficiaries who inherit an IRA in 2020 or later to withdraw the funds from the IRA within 10 years of the IRA account holder’s death.

The 10-year rule applies to both traditional IRAs and Roth IRAs as well as defined contribution retirement plans. Roth IRA distributions are generally not taxable, but the inherited Roth IRA must still be completely distributed by the end of the 10th year following the year of inheritance.

If you own an IRA, you should review your beneficiary designations in conjunction with your estate plan to confirm they are in line with your overall goals and objectives.

For questions concerning "The Secure Act"  or any tax issue you can contact Gregory at gregoryp@gmpcpa.com
Or call the Gollob Morgan Peddy office at 903-534-0088.